Caffè Breve vs Latte – How well do you know the difference?

Latte is that hot drink made from espresso coffee and frothy milk. With its smooth and comforting taste, it is one of the most popular caffeinated drinks of recent years.

However, breve cafe is a less intense version of latte with the difference being the half-and-half of steamed milk and cream.

Both types of coffee originate from Italy but there’s a difference in taste, preparation, and ingredients.

Are you finding it hard to tell the difference between a café latte and breve café? Thinking of making a café breve or café latte (or even cappuccino mousse) at home? Why not try to make the two types of coffee and tell what the difference is by yourself.

In this article, we’ll tell you everything, from the common differences to the ingredients needed and the preparation steps.

To create the perfect Breve or Latte, you need a good coffee maker. If your hardware is a little dated and not up to the job, check out our review of the latest grind and brew espresso machines.

What’s the Difference between the Caffè Breve and Latte?

A café latte is a type of coffee that is made from steamed milk and espresso with a foam topping.

Similarly, also, a breve is a coffee type made of espresso that is steamed half-and-half. Whole milk is not used in making breve coffee as in the case of latte.

Breve coffee is the Italian-invented American version of latte, with a slightly richer and much more delicious recipe.

Also see: Cappuccino vs Traditional Coffee Types – How well do you know the difference?

How to make Caffè Breve at home

What is a caffe breve

A caffe breve is a lot like a cafe latte but the half-and-half is vital to a breve. It’s a really nice, thick, and pretty sweet tasting cafe latte. So the milk must be ice cold right out of the fridge. If it’s warm at all or if it’s room temperature, it’s not going to foam correctly to make perfect foam.

A caffe breve is an espresso-based drink. It’s made like a cappuccino but with half-and-half instead of just milk. It’s also called breve latte, café breve, or breve coffee. Breve is an Italian word that means “short.”

Richer and creamier than a latte

How it is made

How to make Caffè Latte at home

What is caffè latte?

The latte is composed of a double shot of espresso as well as micro-foam milk. Its texture is smooth, creamy, and uniform. The proportions of the latte vary enormously from one establishment to another.

The perfect latte is smooth, tasty, delicate. It is one of the most popular caffeinated beverages in the world.

While one might think that the café latte is an invention created by and for Italians, this would only be half true. Indeed, this drink was created in Italy, but it was intended for American tourists, who found the espresso too intense. The invention of the term caffè latte is said to be attributable to the essayist William Dean Howell, author of Italian Journeys (1867).

Depending on the country, café latte is also called café au lait (France) or cafe con leche (Latin America). Small elements differentiate them, but the basis remains the same.

Then, with the latte came the latte art (the art of making drawings in the coffee crema thanks to the frothed milk). According to sources, latte art first appeared in Italy or the United States.

What is certain is that the great popularity of latte art is due to David Schomer, owner of the Schomer Espresso Vivace café in Seattle. He is credited with creating the rosetta, one of the most popular designs in latte art. Today, latte art championships are multiplying across the world, techniques are always refined and equipment is developing.

Looks creamy and can be sweet depending on the flavor, but not as mocha

How it is made

There are not many differences in latte and breve cafe but for the half-and-half in a breve cafe. Both have foam toppings but while milk isn’t used in making breve. A breve coffee is an American version of a latte, with a slightly richer and much more delicious recipe.

The key to making latte and breve is the froth. It takes time and practice to master and, when poorly done, it ruins the brew altogether. The microfoam should be liquid, but not like milk, smooth, but without bubbles. It should be uniform, shiny, and slightly sweet.

home > Perfect your Brew > Caffè Breve vs Latte – How well do you know the difference? 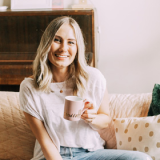 Evelyn is a Coffee enthusiast and writer for Wins Coffee Bar. Her work has appeared in Bean Scene, The Home Kitchen and other publications.

Coffee Nutrition Facts & Labels for your 18 Favorite Brews
Latte is that hot drink made from espresso coffee and frothy milk. With its smooth…
COMMENTS

The Best Ways to Store Ground Coffee and Beans
Latte is that hot drink made from espresso coffee and frothy milk. With its smooth…
COMMENTS

Is French Press Coffee Bad for you?
Latte is that hot drink made from espresso coffee and frothy milk. With its smooth…
COMMENTS
JOIN THE COFFEE CLUB!
Be the first to read breaking reviews, recieve special discounts, and all the happenings!